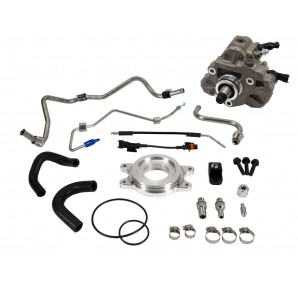 Improve your LML Duramax's reliability and fueling capability with a CP3 conversion. Since its introduction, the CP4 has proven to be less reliable and less capable than the CP3 used in previous Duramax platforms.  Failures of the CP4 are extremely costly and require replacement of the entire fuel system. Avoid a costly failure down the road and convert your CP4 to a CP3 with our complete, no tuning required kit for the 2011-2016 LML Duramax platform. Our kit provides you with OEM fit-and-finish features like a brand new Bosch CP3, Fleece exclusive molded hoses for the fuel feed and return, high flow CP3 fuel fittings, and our valley feed line to support aftermarket lift pump applications.
Includes: