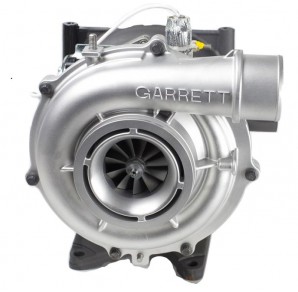 This is a Brand New Garrett Turbocharger, no core charge needed! This is a true Garrett tanufactured drop in replacement. The center housing has been enhanced with the addition of 3 cobalt pins for better durability and improved vane actuation along with Nitride coated Unison Rings. Brand new Vane Position sensor is included with all Brand New Turbos.

Founded in 1936 by Cliff Garrett, the Garrett Corporation grew to become the world's largest turbocharger manufacturer. With manufacturing plants located in North America and Europe, Garrett now employs over 6,000 people. Garrett has always been active in all forms of engine boosting and its involvement in racing has proven to be valuable as a development test bed for advanced design concepts. This Garrett Turbocharger was the perfect match for these Duramax trucks because of the quick spool up and the enhanced turbo breaking.

If you are getting either a P003A or a P2563 code and have replaced your vane position sensor and it did not fix the problem then most likely you have a bad turbo. Loss of power, excess smoke, high fuel consumption, overheating, high exhaust temperatures and oil leakages from the turbocharger are all symptoms that could indicate turbocharger malfunction.